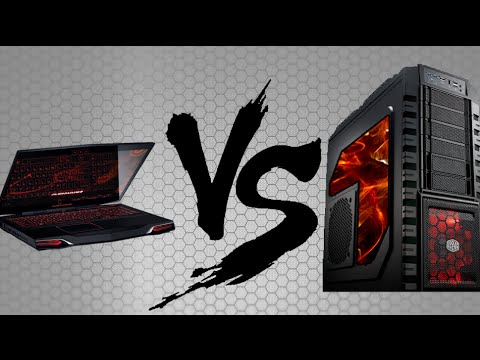 Gaming laptops versus gaming desktops. It’s a debate of wishful thinking and the market meeting demands that have come and gone since laptops entered the market.

The demand is simple: playing games on a portable computer makes life easier for travelers, highly social people who love to game, and even shut-ins or hikikomori who just need to move their computers around their rooms.

Here are a few details to help you understand why the market is the way it is, and to help you pinpoint your choices.

The laptop or notebook computer’s main benefit is portability, and that fact extends to gaming.

Everyone plays games in different ways, and a laptop enables most gaming habits. For people who are on the road often or live in different areas depending on the day, being able to set up a place to both play games and be productive on their computer is great.

For people who want to be stationary, but with the option to move if necessary, laptops can become stationary fairly easily. If you want a portable computer, but can’t deal with unstable wireless internet, it’s not difficult to connect an Ethernet cable and the power cable.

Laptops tend to be more expensive than desktop computers with the same level of computing power, and the ability to play high graphics-demand games only increases the price gap.

Miniaturization is the cost. Getting the same amount of reliable power in a small package costs money. Although some companies release standard and mobile graphics processing units (GPUs) at the same time, you’ll likely have to wait a few months for a laptop that comes close to a cutting edge desktop’s performance.

With gaming laptops, maintenance is another concern and another cost. You need to keep the computer clean to avoid overheating damage, and if you’re playing games that need to access the storage drive often, you’ll need to replace the solid-state drive (SSD) fairly quickly.

The same goes for desktops to an extent, and laptops actually pull ahead of desktop in that their storage drives are either cheaper or the same price.

You can’t easily add or remove much from a laptop while keeping it functional.

For the most part, laptop users are limited to changing a few easy to access components:

To remain relevant as a gaming computer, replacing the GPU is often necessary. Unfortunately, the GPU is soldered onto most laptop motherboards and would require far more skills than simply unscrewing and connecting a few socketed items.

There are a few laptops that have removable or modular GPUs, along with other modular components. The concept has come and gone for over a decade, but no consistent line of swappable GPU laptops has emerged with notable staying power.

While laptops have rigid hardware specifications, desktops can be easily modified without electrical, soldering, or heavy programming skills.

There are many factors that contribute to easier desktop customization, ranging from being part of a bigger hobby culture to market demands. From a practical standpoint, it’s easier to customize computers because they’re bigger.

You don’t need high hand dexterity to put a motherboard into a case or connect most components to the motherboard. Probably the most difficult, sensitive installation point is the processor because of the fragile pins, but you still have a lot more room to work with than when adding a laptop processor.

For gamers, the vital difference comes down to the GPU. Desktop video cards are easily inserted into slots, making upgrading to a new graphics generation a simple task. Video cards have their own industry and sub-culture within computer modding and design, making the customization even more robust.

There are fewer gaming laptops on the market than pre-built gaming computers, and there is always the option to build or upgrade a desktop with individual parts.

Customization lends itself to flexible pricing and piecemeal upgrades. From a single gaming computer, you can choose whether or not to add a new CPU, processor, or memory as needed to perform better in new games.

When it comes to consumer electronics and computers, the multiple hardware component industries try to stay compatible with each other. Years of lessons learned have shown that consumers are less likely to buy the same or barely better expensive parts just because a single component had a massive overhaul.

Because of this, don’t expect to buy an entirely new system just because a slightly faster processor or video card is released. Be sure to check your new component’s compatibility list against your existing computer before buying, but know that physical barriers such as a different socket or slot shapes will be years apart as far as purchase requirements are concerned.

There are times where full system overhauls are necessary. Processor socket types have historically been the biggest game-changer when it comes to computer design since a CPU socket change means adding a new motherboard.

Random Access Memory or RAM is another component that leads to full system upgrades. RAM generations have a lot of changes, but the physical notch that prevents generation mismatching requires a new video card.

In 2019, the difference between current and previous generation motherboards means a new CPU socket for Intel and AMD processors, as well as a new memory slot for the DDR (Double Data Rate 4) memory standard. There are certain motherboards that mix previous and current generation CPU sockets and memory slots, but at the moment it’s wise to upgrade CPU, memory, and motherboard together.

Which Gaming Computer Option Is The Best?

Desktops and laptops perform the same functions, but for very different audiences. As far as which is better, the question comes down to whether or not you need a portable computer.

If you need a portable computer and want to be able to play games in multiple areas, a laptop is the best choice. A desktop computer with all of the best components won’t be any use to you if you’re always away from home.

For the cost efficiency and scalable power, the desktop computer wins. Desktops do everything that laptops can do, but with more room for improvement.

If you don’t need a portable system, but would like the option to move around, how much do you need to move around? If you just need to move from one room of a building to another, you could build a computer that has a secure access panel that won’t fly open when you carry it.

By building a desktop computer with an easily carried case, moving to different rooms is easy. Although you will still need to turn the computer off, SSDs turn on very quickly, and waiting for the system to start up again is a non-issue.

Waiting for your programs or online games is another story. If your game takes a long time to load or if you have to wait on the internet to stabilize every time you start a game, shutting down to move isn’t a good idea. A laptop that doesn’t need to turn off or disconnect is a better option in this situation.

Cable management is another big issue for desktop computers. Although USB (Universal Serial Bus) cables are easy to connect and disconnect, it can be a chore to wrap up and carry every USB device to a new local.

After dealing with USB devices, you still need to worry about the power cable, the Ethernet cable, and monitor(s). With a laptop, you have fewer cables and the screen is built into the device.

Depending on how expensive your gaming laptop is, you may be able to buy more than one gaming computer with similar or passable performance for multiple locations. This isn’t necessarily portability, but it allows you to game in more than one location without worrying about dropping any of your components.

Games with saves need to be managed. If you use platforms such as Steam, many games can be saved and accessed via the cloud (internet storage) to download and use on any computer.

Alternatively, you could purchase a slightly lower cost gaming laptop and invest in supporting devices. Many gaming laptops run hot, and you may want to spend money on aftermarket fans, cleaning equipment, and peripherals.

Laptops can be converted into desktop-like workstations if you miss the bigger keyboard and display layout. Connecting an external gaming monitor, keyboard, and gaming mouse is easy, and you can buy a stand or gaming desk that supports your laptop.

In the end, it’s all about whether you want to spend more money on portability. Both options are great and can deliver the gaming you need at a moment’s notice.

Get in touch with a gaming tech expert to discuss other vital costs and components for your next gaming rig.